Before we headed over to Wizard World Reno Day one I had a chance to take some pictures of Ember Sky in her new Spidey Gwen outfit. We met at wizard world Reno in 2014. We have since ran into each other at many cons. She has even been a guest writer, but for now enjoy the pictures and a quick interview.

G33K-HQ: When did you start cosplaying?
Ember Sky: My first cosplay was about 8 years ago (my goodness, now I feel old!). I still cosplay that character (Rikku’s thief from Final Fantasy X), but the outfit has undergone some major changes and revisions in the ensuing 8 years!

G33K-HQ:What was your favorite character to cosplay as?
Ember Sky: It’s hard to pick a favorite, because there’s something I love about just about every character I cosplay! If I had to pick one, I would probably say Twilight Sparkle from My Little Pony – just because there’s no feeling quite like the feeling you get when a little kid loves your costume and grills you in character.

G33K-HQ:  What first attracted you to cosplay?
Ember Sky: Cosplay is a great creative outlet, and I first started because of the challenge of trying to bring these characters to life!

G33K-HQ: What is your favorite part of doing cosplay?
Ember Sky: I love the moment when someone else loves your character and you get to bond with another person over the cosplay. Again, though, it’s hard to pick a favorite thing! Cosplay has taught me a lot as a crafter, and it’s been the foundation for a lot of really great friendships in my life.

G33K-HQ: How does Facebook/social media influence your costume making and character selection?
Ember Sky: I love getting input from fans on what characters they think I should cosplay! Social media is best for putting together group cosplays – reaching out to other cosplayers that you respect and getting to work with them.

G33K-HQ: Do you have a dream cosplay?
Ember Sky: My current dream cosplay is to put together a Rule 63 of the Prince from Saga, complete with a working television monitor. I’m definitely thinking about how to make it work, and really make it shine, but I probably won’t even begin to start that for another few years. It’s hard to be a cosplayer in school full time with a job!

G33K-HQ: What is your personal favorite cosplay you have done?
Ember Sky: I don’t think I could choose! There’s something I love about all of my cosplays, and the varying reactions to them. (Okay, okay, I’m lying. I love cosplaying Rikku from Final Fantasy; her character is so bubbly and cheerful, and I feel like a badass when I put on that outfit and carry the thief blades!)

G33K-HQ: Most memorable moment whilst cosplaying?
Ember Sky: At a convention a few years ago, I was cosplaying Twilight Sparkle. It was the last day of the con, and things were winding down; I was standing outside and a little girl, maybe five years old, came up to me and started quizzing me about life in Equestria, where Spike was, if I missed being a pony – all the kinds of questions you expect from a little girl who met one of her favorite characters. It was such a fun and engaging moment, and we talked for about ten minutes, and it was just so much fun to be able to bring Twilight to life for her!

G33K-HQ: Where do you get your ideas for your next cosplay outfit?
Ember Sky: There are a lot of things that influence me to pick an outfit for cosplay. Some are inspired by guests at a convention – if there’s an actor or actress I really love and I have the opportunity to meet them, I put together a cosplay of a character they’ve played. Others are inspired by my love for the character. And, I’m a mother, so some are chosen by my daughter, who loves to cosplay with me!

G33K-HQ: Have you had any cosplays go wrong/encountered problems whilst making cosplays?
Ember Sky: Always! It can be really frustrating when you’re in the middle of a build and something doesn’t work out the way you wanted to, but I try to take those set-backs as learning opportunities so I can apply that wisdom to my next cosplay. None of my cosplays are perfect the first time out the bat, though; I’m constantly trying to improve on each piece until I really feel like I’ve captured the look and the character exactly the way I want to.

G33K-HQ: Have you ever done group cosplay? If so how did you find that experience?
Ember Sky: Group cosplay is a lot of fun! I’ve done several group cosplays, and I’m always happy to do more if the idea is inspiring to me.

G33K-HQ: Do you have one piece of advice that you would give to cosplay virgins?
Ember Sky: I think the best advice is to just have fun. Cosplay should be fun, and sometimes we lose sight of that when we’re up until 4am, suffering from hot glue burns and needle pricks. If you love your character, then rock what you’ve got. A lot of virgins want to meet an unrealistic expectation coming out the gate, but most cosplayers grow and learn and become better over time. Every step is a learning process!

G33K-HQ: What is your dream con to go to and why?
Ember Sky: I would really love to go to SDCC, mostly because of the quality of cosplay at that convention; I’d love to be able to gawk at some of the amazing pieces that people put together for those massive conventions.

G33K-HQ: Have you ever regretted cosplaying a specific character?
Ember Sky: I’ve never really regretted any of my characters, but I have sometimes worn very skimpy costumes to very cold conventions, which I try to avoid now!

G33K-HQ: Can you share with us any future cosplays you are planning?
Ember Sky: I think my next build is going to be a Rule 63 Ghost Rider, and I’m really excited to put that one together!

Ember Sky: Being passionate and enthusiastic and unashamed about the things you love! 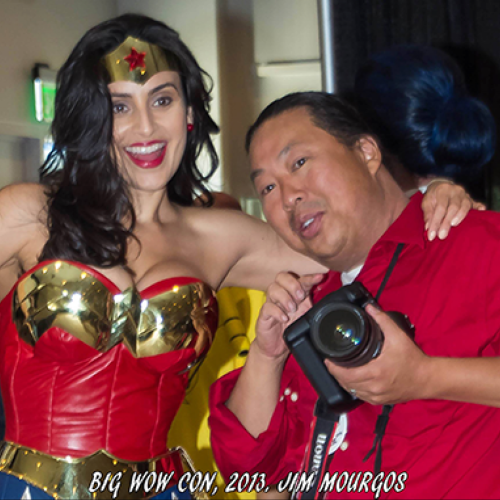 Perry "Agent P" Louiehttps://g33khq.org/
I shoot canon’s, I will steal your soul one frame at a time.